The CCPO also held meetings with bishops and reverends and took them into confidence and extended his felicitations for Christmas. He said walkthrough gates would be installed at entry and exit points of all churches during the Christmas services, and the ceremonies monitored through CCTV cameras.

Mr Hameed said that Christmas was round the corner and Lahore police was fully prepared to provide security to parks and other public places. “Shopping centres and market places are being monitored to ensure safety for the Christian community,” he said.

He added that police would remain on high alert particularly on Christmas eve.

BAHAWALNAGAR: The district police issued a security plan for Christmas under which over 700 police officials will be deputed for 27 events at 14 churches.

The Bahawalnagar district police officer (DPO) said that the plan had been constituted keeping in view religious freedom and sense of security for the Christian community. The station house officers had been directed to closely inspect hotels, restaurants, guest houses and other places in their jurisdiction where people from outside the city came and stayed. Additionally, Elite Force, Eagle Squad and other teams would patrol the area.

Those entering churches would be checked at four points; walkthrough gates and metal detectors would be installed by the Special Branch and Civil Defence. Additionally, the entry and exit points of the venues would be blocked by barbed wires and barriers and only one point opened.

The DPO said the Christian community was an integral part of society and it was his duty to protect them. He called on scholars and priests to play their part in promoting brotherhood and peace, adding that Islam gave a message of tolerance.

He further said that traffic deputy superintendents of police would control the flow of traffic so citizens did not have to face inconvenience. He also requested the citizens to stay vigilant and keep an eye on any suspicious activity or person around them and inform the police immediately.

OKARA: The security of all 58 churches in the district has been beefed up; 11 among them have been declared sensitive and around 2,000 policemen with other security personnel would perform duty on this occasion.

DPO Umer Saeed Malik along with Deputy Commissioner Usman Ali visited the Nasri and Christ church to review security arrangements. The leaves of all policemen have been cancelled to ensure proper security.

Meanwhile, the University of Okara (UO) administration organised a luncheon on the occasion of Christmas for more than 40 Christian employees of the varsity. Vice Chancellor (VC) Prof Dr Zakar Zakria was the chief guest.

The VC said that the Christian employees were equally respectable as any other staffer of the university. He asserted that the education of the children of this community and other rather underprivileged segments of society would be dealt with on priority.

The university staff cut a Christmas cake and said that the rights of the Christian employees would be acknowledged at all levels. 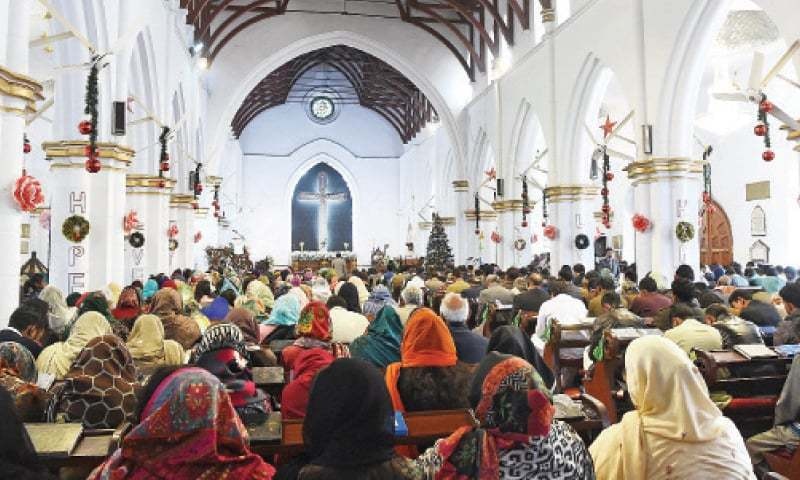