More than 22 thousand officers and officials will be deputed for the security of 2778 churches across Punjab.

Security of recreational places must also be focused along with Christian worship places.

Follow-up letter must be sent to interior department Punjab for the license cancellation of licensed arms used in criminal activities: IG Punjab

Inspector General of Police Punjab Shoaib Dastagir said that on Christmas every possible measure should be taken for the security of churches across province according to the SOPs issues by the Central Police Office while specially focusing the security of Christmas markets and recreational places along with Christian worship places. He further directed DPOs to implement the security plan of churches and parks under their own supervision while snipers and commandos’ in civvies must also be deputed for the security of A category Churches. He further directed to ensure the security monitoring through CCTV of sensitive churches while search and checking of citizens through walkthrough gates and metal detectors must also be ensured. He also directed to take stern actions against the elements involved in the sale of toxic liquor. He further said that a crackdown against the top 20 criminals of every district must be carried out in the direct supervision of relevant DPOs and report of the actions to be shared with CPO on monthly basis. He also directed to compile and submit a report regarding the cases registered against land grabbers and arrested accused within 7 days. He issued these directions wile presiding an important meeting at Central Police Office. During meeting Christmas Security, arrest of proclaimed offenders, law and order situation and performance of police teams were reviewed.

During meeting Addl IG Operations Inam Ghani briefed IG Punjab about the Christmas security plan that nearly more than 22 thousand officers and officials will perform security duty at 2778 churches across Punjab including 416 Inspectors, 1198 Sub Inspectors, 2213 ASI, 1693 Head Constable and 15615 constables along with other officials are included.

He further shared that for the security of Christian citizens nearly 3000 metal detectors and walk thorough gates will be installed at churches and parks. IG Punjab directed to brief the officials deputed at Christmas duty so that they can perform at high alert.

IG Punjab directed to take action against the dacoity, robbery and snatching incidents saying that a report should be submitted regarding absconders and arrested accusers in such cases sharing the efforts made to arrest such criminals, within 10 days. He also directed to submit a report of arrests and efforts made in the cases of old enmity actions taken by the relevant circle officers within 10 days. He also directed to write follow up letters for the cancellation of licences of the arms used in crimes to interior department while a report should also be submitted regarding the actions against the use of such arms during current year. He directed to take action against the criminals who use such arms in crimes without any delay according to law. During meeting Addl IG IAB Azhar Hameed Khokhar Addl IG Operations Inam Ghani AIG Operations Imran Kishwar and other officers were present. 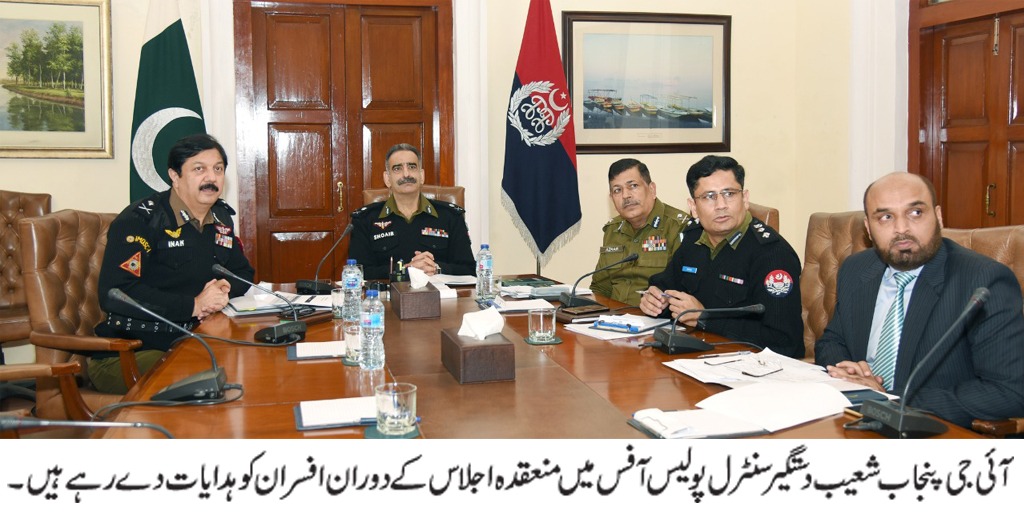