IAB conducted total 1097 inquiries out of these 855 are completed while 242 are under process.

During current year recommendations sent to field officers after inquiries against 166 officer and officials for punishment: Addl IG IAB

Zero tolerance policy should be adopted against the responsible of delay in registration of FIRs.

For speedy redressal of public complaints follow up of all applications must also be ensured: IG Punjab

Inspector General Police Punjab Shoaib Dastagir said that to improve the Internal Accountability System of police is at the top of my priorities because officers and officials taking no interest in the redressal of public complaints and trespassing their powers will not remain part of my team so their timely accountability is crucial for the overall improvement in the performance of the force. He directed Addl IG IAB to issue warning letters to those DSPs who are not taking interest in redressal of the public complaints and if they do not improve their performance after warning letters they have no right to remain on the field postings. He further directed to make every possible effort for redressal of the complaints received at 8787 IGP complaint center dealing the complainants congenially, adopting a zero tolerance policy against the officers and officials found responsible for the delay in FIR registration. He also directed to ensure a follow up of the complaints received at 8787 through calls, SMSs, Emails and by Posts to resolve the citizen’s complaints at earliest. He further said that to resolve the public issues should be our first priority because only by best public service delivery trust between public and police can be strengthened. He expressed these views while presiding a meeting regarding the Internal Accountability Bureau at Central Police Office today.

Addl IG Azhar Hameed Khokhar briefed IG Punjab about the performance, in his briefing he shared that during current year IAB did total 1097 inquiries out of these 855 are complete and 242 are under process and after these inquiries 166 officials and officers were recommended for punishment. He further shared that teams of IAB inspected 862 Police Offices, Police Stations, Khidmat Markazs, Model Police Stations, and other offices while taking action on the complaints by citizens SP complaints get 5106 FIR registered. Regarding the performance of 8787 IGP Complaint Centre during current year he shared that total 95493 complaints were received through call, SMS, emails and open courts etc out of these 89267 complaints were resolved and on 11529 FIR were also registered, remaining 6226 complaints are also under process, he further added.

IG Punjab directed the officers that reward and punishment system should be ensured at every level so that performance of the Police force should be further improved, there will be a strict accountability system for those who perform their duties with carelessness and encouragement for those who are performing well. He further directed that misbehave, bad treatment with citizens and illegal detention will not be tolerated and officers involved must be ready for strict accountability. During the meeting Additional IG IAB Azhar Hameed khokhar, DIG IAB Imran Mehmood, AIG Complaints Ibadat Nisar and other senior officers were also present. 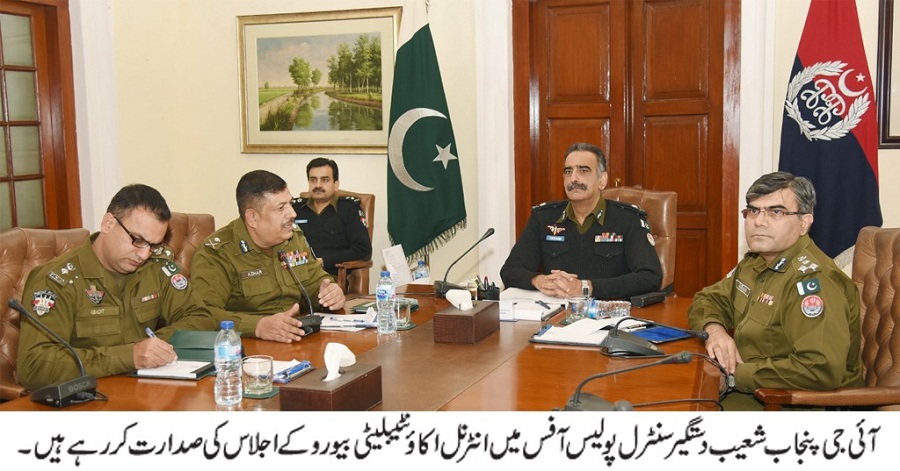