Ulema of different walks of life and members of district peace committee called on IG Punjab at central police office.

Ulema of different walks of life and members of district peace committee called on IG Punjab at central police office.

Special Fateha Khawani was conducted for higher ranks of martyrs of Punjab Police.

Inspector General of Police Punjab captain retired Arif Nawaz Khan said that Punjab Police is fully alert for maintenance and supremacy of law despite protection of lives and wealth of people and every sacrifice shall be offered for this mission of public service and protection. He further said that strong coordination between public and police is the need of time in order to maintain law and order in the society so that process of elimination of professional criminals may be boasted up. He moreover said that sectarianism has been eliminated due to timely actions by punjab police and inter religious mutual harmony of religious scholars along with implementation of SOPs devised in National Action Plan are being strictly ensured in this regard. These views were expressed by him he was meeting with different religious thoughts of people including Ahl e sunnat, Ahl e Tasheeh, Deoband, Barelvi and members of district peace committee. Allama Shakeel Rehman Nasir, Allama Hafiz Muhammad Kazim Raza Naqvi, Allama Muhammad Zubair Virk, Mufti Syed Ashiq Hussain, Allama Hafiz Sami Ullah and Rana Abdul Manan along with other persons were in the delegation. The religious leaders paraised the leadership of IG Punjab and paid homage to Punjab Police for maintaining law and order in all districts during the important religious events especially eid Milad Ul Nabi and Muharram Ul Haram and said that due to untiring efforts and determination of Punjab Police there is peaceful environment due to which we are greatly thankful to police officers and officials. They further expressed that Punjab Police is performing its duties with determination for protection of lives and wealth of public in the routine despite the religious and national events. They further said that with the efforts of Police force there has been a great downfall in in incidents of terrorism which speaks loud of performance of Punjab Police. The delegation of religious scholars presented a shield to IG Punjab for maintaining law and order in all cities of the province whereas on this occasion, a special ٖFateha Khawani was conducted for higher ranks of Shuhada of Punjab Police. 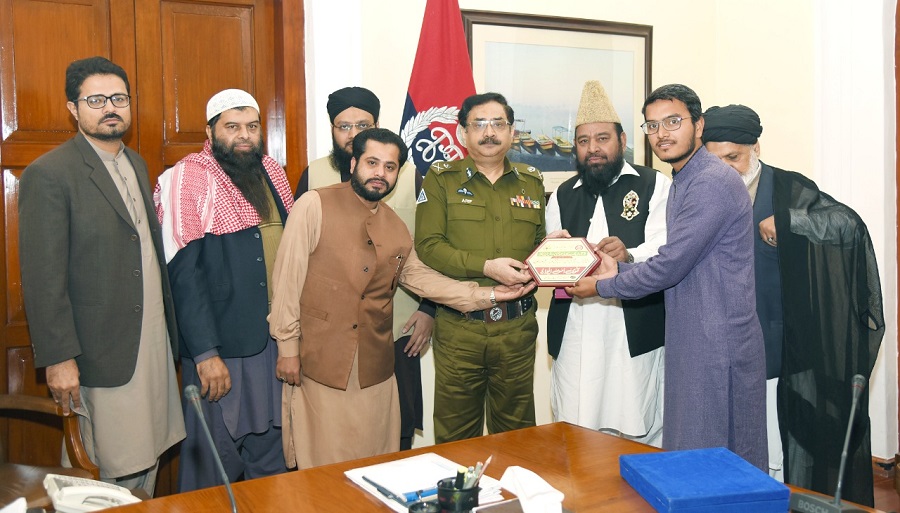