IG Punjab issued directions while addressing to under training officers.

Politeness and courteous behavior are need of the time in order to make better image of Police among masses.

Under training officers should adopt rules of modern policing and work with hard work, commitment and diligence in their professional life, IG Punjab.

Inspector General of Police Punjab Captain Retired Arif Nawaz Khan said that for supremacy of law and protection of wealth and lives of the people, Punjab Police is ensuring best service delivery with the help of hard work and full determination therefore one should keep in mind while in the line of duty that we are the guardian of hundreds of martyrs and also unprecedented sacrifices of Ghazis. IGP added that every step of Police should be for the better collective image of Police and for this all officers and officials should deal with citizens politely, with good behavior, soft talks as per the vision of Open Door Policy so that mutual cooperation and environment of trust might be maintained between police and public. He moreover said that under training officers should learn and adopt modern policing, latest technology and investigation means for upgrading standard of Police. IGP reiterated that officers should perform their duties keeping in view smart and community policing coupled with hard work, commitment and diligence so that they might face the modern challenges effectively. He added that for quick delivery of police services to public, Punjab Police have launched different facilitation projects like Front desk, police khidmat marakiz, 8787 complaint center and digitalization of Police stations whereas the terrorists activities have been reduced considerably due to timely actions and intelligence based operations taken by counter terrorism department (CTD). He further said that police officers should act an exemplary team leader in accordance with the urban policing rules and utilize the available resources for protection and service of the public. These views were expressed by him when he was addressing to under training ASsP of 46th specialized training program at central police office today. The delegation had 6 female ASsP and collectively 32 under training officers from National Police Academy.

Addl IG Operations Punjab Inam Ghani briefed the delegation about the modern projects, operational methods and projects of public service delivery and also steps taken by Punjab Police in this regard. He further told that Dolphin, Peru, Anti Riot, Riverine and Special Protection Unit and other specialized forces have multiplied the overall efficiency of performance of Punjab Police whereas CCTV cameras have been installed on front desk, lock ups and inside offices of SHOs for bringing a change thana culture and these CCTV cameras are being monitored from central police office monitoring room. He further explained that Punjab Police is strictly implementing national action plan by which terrorist activities of Anti social elements and miscreants across the province have been reduced to a large extent. DIG IT Zulfiqar Hameed briefed the delegation about IT and modern technology based projects of Punjab Police and told that Police station record management system, Human Resource Management System, 8787 complaint management system and Criminal Record Office along with other modern projects have been started by Punjab Police which have resulted in digitalization of working system of Punjab Police whereas supremacy of law have been ensured with the help of projects like Crime mapping, Hotel Eye, Tenancy Registration and Anti Vehicle lifting system etc. The under training officers also visited 8787 IG complaint center, monitoring and control room and other sections and asked questions about challenges faced by police and available resources to cope these challenges. On this occasion Additional IGP R&D Captain Retired Zafar Iqbal, Additional IGP Establishment Captain Retired Ahmed Latif, Additional IGP Training Tariq Masood Yasin, Additional IGP D&I Azhar Hameed Khokar, Additional IGP Operations Inam Ghani, Additional IGP Logistics & Procurement Ghulam Rasool Zahid, Additional IGP Special Branch Zaeem Iqbal Sheikh along with other officers were present. In the end, memorial souvenirs were also exchanged between IG Punjab and head of the delegation. 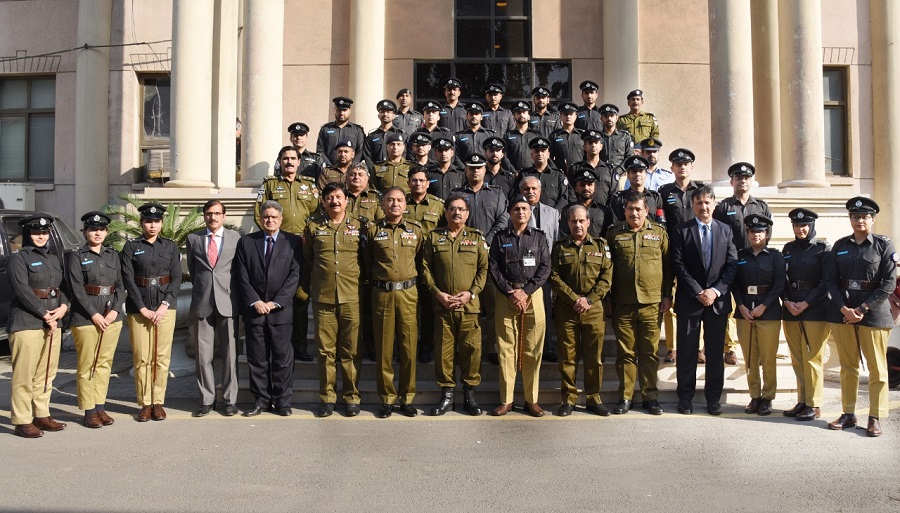