Martyr Asif Ali made the force proud by embracing martyrdom in the line of duty.

RPO Sheikhupura has bee directed to ensure arrest the murderers of Constable Asif Ali at earliest.

The welfare and look after of family of Shaheed Asif Ali will be fully ensured. IG Punjab

Inspector General of Police Punjab Captain retired Arif Nawaz Khan praised Constable Asif Ali who embraced shahadat while foiling the dacoity in Sheikhupura and paid homage to priceless sacrifice of Asif Ali saying that Asif Ali has enhanced the prestige and pride of the police department by offering his life. He added that for the supremacy of law and lives and wealth of people will be protected at any cost with the help of such bold personnel of Punjab Police in the future. He directed RPO Sheikhupura to ensure arrest of murderers of Shaheed Asif Ali as early as possible and strict action should be taken against them according to the law. IG Punjab further directed RPO Sheikhupura that welfare and care of Shaheed family should be ensured on top priority and also to keep close coordination with the deceased family to address their issues. IGP ordered to speed up actions against criminals and anti social elements in the society across the province and directed to boost the crackdown against criminals with the help of search, sweep, combing and intelligence based operations. He stressed upon the force that they should not leave any stone unturned for ensuring protection of wealth and lives of people to ensure supremacy of law and order without any compromise. Funeral prayer of Constable Asif Ali was offered at Sheikhupura police lines on Saturday in the morning in which RPO Sheikhupura Sohail Habib Tajak, DPO Sheikhupura Ghazi Salahuddin along with other officers were present. After the funeral, the body of Shaheed Asif Ali was taken to his hometown Noon PO Riyan Pura Tehsil Mureedkay where he was laid to rest. 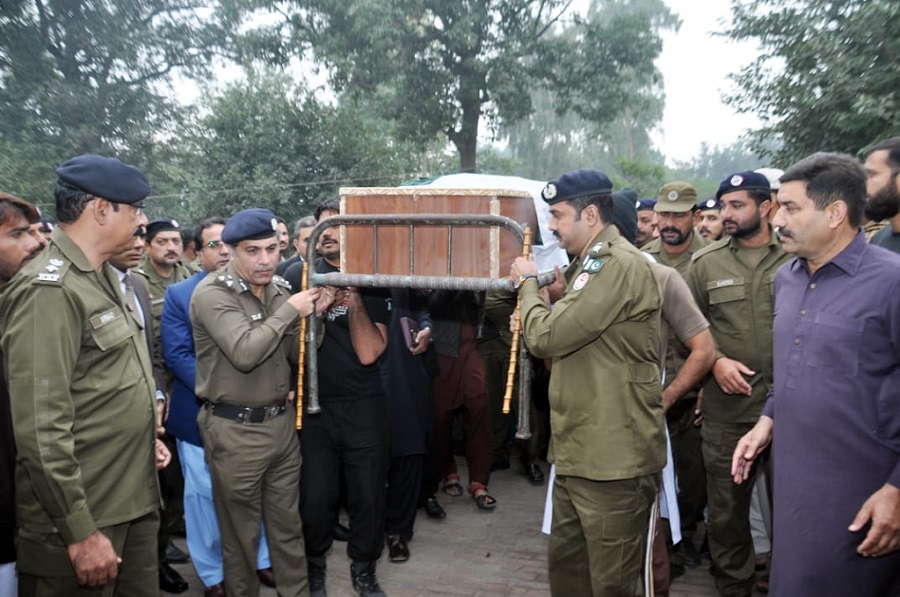