IG Punjab expressed his displeasure over the unfortunate incident of a custodial death in Rahim Yar Khan.

To take care of the health of persons in lockups is also the responsibility of police.

DPO,s should personally monitor the security arrangements of A category processions in sensitive districts

Drones Cameras should be used for aerial monitoring of the sensitive processions: IG Punjab

Inspector General of Police Punjab captain retired Arif Nawaz Khan expressed displeasure over the incident of custodial death in Rahim Yar khan and he further added that in case of custodial death or torture relevant circle officer will also be accountable, IG Punjab directed RPO Bahawalpur to conduct the inquiry of custodial death of Salah Ul Din ensuring a strict departmental and legal action against the persons responsible. He further said that lockup is for safe custody of the accused so it is the responsibility of police to provide them good and timely medical care and in case of any laxity in this regard both legal and departmental actions will be taken against the responsible. IG Punjab while giving directions about the Muharam Ul Haram said that in sensitive districts DPO,s should personally monitor the security arrangements in of A category processions and snipers should also be instqalled on the rooftops on the buildings in the vicinity of sensitive Majalis. He further directed to utilize the Drones Cameras for the security of 9th and 10th Muharam A category processions and their routes should also be checked by Bomb Disposal Squad, Sniffer Dogs and Special Branch Teams while parking should be atleast 100 feet away from the Mosques and Imambargahs. He also issued directions regarding the security arrangements for the devotees on the annual Urs of Hazrat Baba Fareed ud Din Ganj Shakar in Pakpattan, women officials should be deputed for the search and security of women devotees while commandoes in civvies should also be deputed inside the shrine.   IGP also directed to ensure the smooth flow of traffic so that devotees can visit the shrine on Urs without any trouble. He expressed these views while issuing directions to the CCPO Lahore and all RPO,s in a video link conference held today at Central Police Office.

During conference IG Punjab directed officers to specially inspect the lock ups and video recording during their surprise visits to police stations and in case of any violation of the SOP a strict legal and departmental action must be taken without any delay. He further said that RPO,s who require additional recourses or personals for Muharam security should contact with Addl IG Operations. He further said that in sensitive districts search sweep and combing operations should continue in the vicinity of Imambargahs, Processions and Majalis ensuring a strict implementation of loud speaker act, ban on wall chalking, arms display and aerial firing. 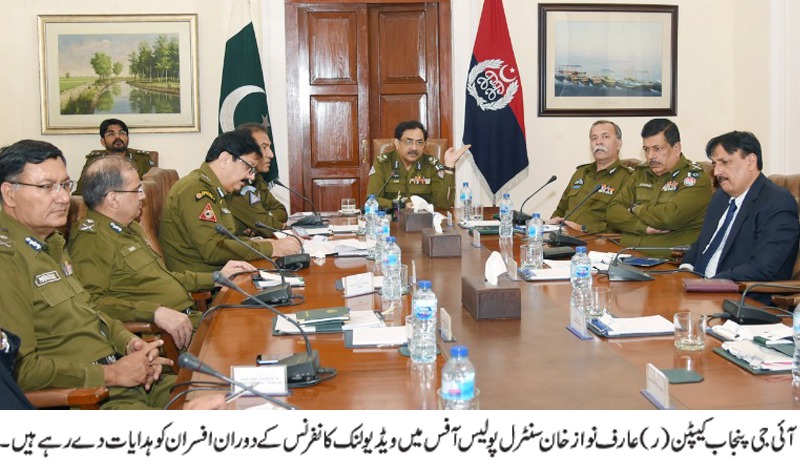