Mutual   information sharing mechanism was agreed upon in order to countering and taking actions against drugs smugglers and anti social elements of the society.

Inspector General of Police Punjab Captain (retired) Arif Nawaz Khan said that elimination of persons involved in international smuggling and dealing of drugs is the need of time and for this purpose a well connected and coordinated sharing of information must be ensured. It will help out and boost the process of breaking supply chain and network of drugs pushers. He further said that elimination of drug peddlers who compel the youth to plunge into curse of drugs is top priority of Punjab Police and in this regard joint operations of Punjab Police and Anti Narcotics Force are being conducted in different districts of Punjab. These views were expressed by IG Punjab during a meeting with delegation of Iranian Police at Central Police Office. Lieutenant General Law Enforcement and Anti Narcotics, Umaid Sarwari with other senior officers of Iranian police were among the delegation. During the meeting, in order to take actions against drugs smugglers, mutual sharing of information between Punjab Police and Iranian Anti Narcotics Police was agreed upon whereas matters of mutual interests were also discussed.

Inspector General of Police Punjab appointed Addl IG Operations Inaam Ghani as a focal person for keeping close coordination with Iranian Anti Narcotics Police and directed that a close liasion should be ensured with respect to information sharing. Iranian delegation briefed IG Punjab about modes operandi and modern surveillance system of its force and told that units of Anti Narcotics, Cyber Crime and Anti riots have been established in Iran to counter crime fighting and those units have been successful in maintaining peace and law and order and supremacy of law  in the society. He moreover said that mutual coordination of both forces will be helpful in breaching chain of supply and network of persons involved in drugs smuggling. Iranian police officers acknowledged and praised the martyrs and actions of Punjab Police against terrorism. In the end of the meeting, memorials shields were exchanged between IG Punjab and Iranian police officers. 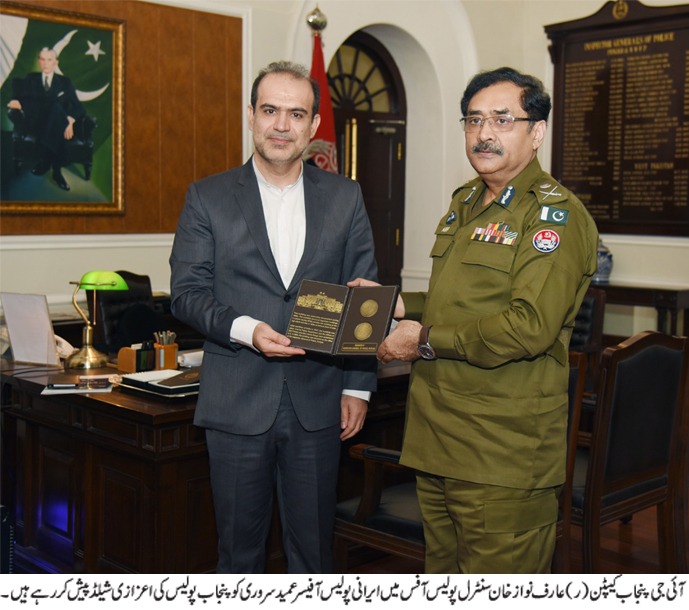