LAHORE: For many people, a motorcycle is the only form of transport they can afford. These people are often among the most vulnerable, and the impact of the loss of their two-wheeler can be financially challenging.

In a bid to protect these individuals, law enforcers have crafted a strategy to control the soaring rate of motorbike theft incidents in Lahore.

According to the police records, 4,456 motorcycles were stolen from different parts of the provincial capital in 2019, out of which 60% have been recovered.

“Following a spike in motorcycle theft, we have crafted a strategy whereby all divisional SPs are provided the record of motorcycle theft incidents in their areas,” said Senior Superintendents of Police (SSP) Operations Ismail Kharak.

“To make the identification process easy after theft incidents, the Crime Record Branch has provided the photographs of everyone involved in motorcycle theft to all Station House Officers (SHOs),” he added.

As part of the strategy to limit the theft incidents, the police plans to continue with enforcement, along with requests to the public to ensure they follow basic prevention strategies like improving safety and the use of safe locking techniques.

According to Acting Superintendent of Police (SP) Anti Vehicle Lifting (AVL) Asim Iftikhar, 123 members of 41 different gangs have been arrested this year. So far, he said 2,467 motorcycles have been recovered.

Along with tightening the noose on offenders involved in motorcycle theft, police officials are also planning to take action against those who are involved in buying parts of stolen motorbikes in the city.

While permanent solutions to the motorbike theft problem are hard to find, greater public awareness may be the only way to curb theft.

According to SSP Investigation Zeeshan Asghar, on an average, a robber spends 2-4 minutes to steal the motorcycle. “They choose motorbikes parked in isolated areas and a companion usually provides them with cover while they break the locks,” Asghar added.

He explained that most thieves use a variety of tools to unlock motorbikes, including master keys. Once stolen, these motorcycles are dismantled and their parts are sold.

“After breaking the locks, they also change the number plates in some cases to transfer the motorbike to a safe place,” SSP Asghar further said.

In certain instances, the appearance of these stolen two-wheelers is changed to prevent law enforcers or even the owners from recognizing their motorbikes. Asghar said that the investigation department is making adequate arrangements to trace motorcycle theft cases. 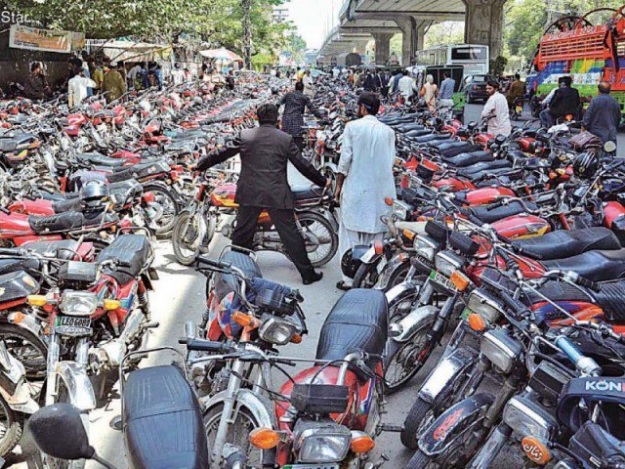