LAHORE: Inspector General Punjab Captain Retired Arif Nawaz Khan said that punishment and reward are the core steps in Punjab Police for betterment of force and it is clear that we have no other option except ensuring community policing for good performance and public service. He further said that police force is awarded upon diligence, bravery and honesty and at them same time they are also punished for committing negligence, carelessness and high handedness. Performance of officers and officials are also being monitored through an internal accountability system in this regard and I want to clear it that there is no place of officers and officials in this department who trespass their powers. IGP said that the process of punishment is carefully conducted so that innocent could be saved from punishment. These views were expressed by the IGP during awarding punishment to different officers in orderly room held at central police office.

IG Punjab reviewed the enquiry reports of 12 DSPs who were suspended on public complaints. IGP issued different punishments and orders of reinstatement whereas officers were heard and given full opportunity by IG Punjab to prove their innocence in this regard. On this occasion IGP reinstated 06 DSPs upon being proved innocent in the enquiry whereas 06 DSPs were punished according to their charges including dismissal from service of one DSP. The officers who proved innocent in the enquiry are as DSP Tanveer Ahmad Bhatti, DSP Khalid Masood Nasir, DSP Anwar Saeed Tahir, DSP Malik Daud Ahmad, DSP Ashiq Hussain and DSP Saleem Akbar whereas DSP Nazeer Ahmad was dismissed from service upon proving of negligence in duties, carelessness and corruption charges. Other officers who were awarded punishments of censure include DSP Abdul Lateef Kanju, DSP syed Mukhtar Hussain, and DSP Azmat Hayat whereas two year increments of DSP Ehsan Ul Haq have been withdrawn. IG Punjab while giving directions to officers said that only honest, diligent and hard working officers will be seen with respect in the department and process of acknowledging their services will be continued at every level.

Meanwhile, spokesperson of chief minister Punjab Dr shehbaz gill called on IG Punjab captain retired Arif Nawaz Khan at central police office.During the meeting, steps to address the public complaints timely especially 8787 IG complaint management service, police service center and reforms regarding police station were discussed in details. IG Punjab briefed Dr Shehbaz Gill about projects of smart and community policing system and told that as per the vision of current government it is the top priority of Punjab Police to address the issues of public without any delay and facilitate the citizens with full determination. IG Punjab told that the projects launched with the help of information technology especially front desk, 8787 IG complaint center and working of Police khidmat marakiz are being made more effective and viable whereas working system of Police has been updated through modern softwares in accordance with the contemporary age. The citizens are getting benefits from this system and trust level between police and public is also being improved. He further said that the hurdles in registration of FIRs of citizens have been declined considerably with the appointment of SP complaints in all districts of the Punjab.

Dr Shehzab gill visited 8787 IG complaint center and monitoring room and reviewed the working of different projects. DIG D&I Ahsan Younas and AIG Complaints Zahid Nawaz Marwat while briefing told that the applications received over 8787 IGP complaint service are addressed and timely action is being taken and hundreds of FIRs are being lodged against those who are found guilty of disobeying the set SOPs. During the visit of monitoring room, Dr Shehbaz gill called the installation of cameras in lock up of Police stations a revolutionary step and said that this step of IG Punjab will play a revolutionary role in old traditional thana culture. He further added that all the projects started with help of information technology are plausible and it will create a professional, skilled and strong force and will make a public friendly police. He further said that force of Punjab Police is playing a role of front line soldiers in a war against terrorism and the sacrifices of officers and officials Punjab Police are priceless for maintaining atmosphere of peace. Addl IG operations Punjab Inam Ghani, DIG Legal CPO Jawad Ahmad Dogar and AIG complaints Zahid Nawaz Marwat along with other officers were also present at this occasion. In the end of the meeting IG presented a memorial sovenoir of Punjab Police to Dr Shehbaz Gill. 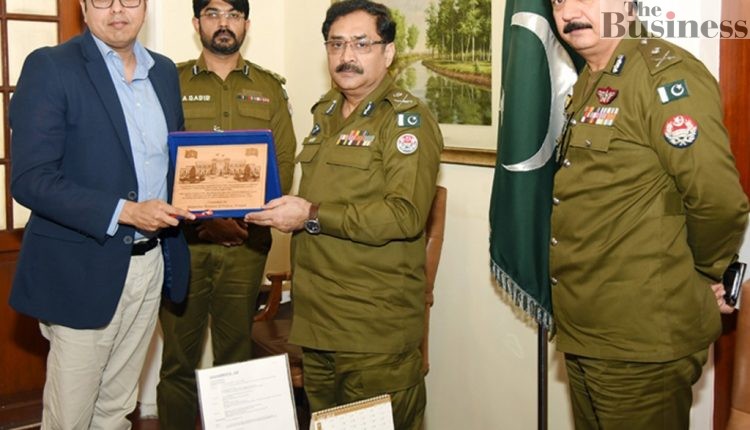