He inaugurated One Window Driving Licensing Branch and its newly constructed building.

He directed to boost up the operations against the criminal elements and to control the crime rate during the meeting.

Inspector General Police Punjab Captain Retired Arif Nawaz Khan has said that Punjab Police despite limited resources and personnel is performing duties with diligence and commitment to protect the lives and wealth of the people. Furthermore to provide best policing services to public with convenience under and integrated system Khidmat Marakiz and one window licensing center has been established where in a congenial environment fourteen police services are being provided under one roof.  He further said that department is practicing a strict internal accountability system and those who found guilty of abuse of their authority and illegal action face a strict accountability system. He further said that Punjab is a large province having total 716 police stations out of these more than 100 police stations do not have their own buildings. Keeping in view the scarcity of funds with government whatever budget government provide to the department is spent on department’s performance and welfare of the officials according to the decided priorities. IG Punjab said that police force is playing its front line role despite difficult circumstances, to increase salaries a frozen allowance of police is being restore while government duly recognize the fact of meager salaries and soon there will be increase in their salaries also. He also said that despite scarcity of resources Rawalpindi police and traffic police is performing well and foolproof and extra ordinary security will be provided to all the cricket matches PSL 5 being played in Punjab. He expressed these views while inaugurating new building of one window licensing branch at Traffic Headquarters Rawalpindi and during a meeting at RPO office. At this occasion RPO Rawalpindi Captain Reitred Ahsan Tufail and CTO Muhammad Bin Ashraf along with concern police officers were present.

IG Punjab further expressed his desire for a separate latest and well equipped hospital like Pakistan Army’s CMH as due to the work load and stress police officials became victim of Sugar, Hepatitis, and heart diseases health of police officials and their families are among our priorities and with he cooperation of Health Department PC One for a health project in Rawalpindi has been completed while very soon at 98 hospitals under the University of Health Sciences free medical services will be provided to police officials further more on my request CM Punjab Usman Buzdar has assured issuance of health cards to Police Officials. Motorway Police is performing well due to the fact that their working hours are only 8 hours. Punjab police has not received new vehicles since last 10 years and in use vehicles are old but still police is doing a commendable job in the available resources. He also said that a good professional relationship with media is among police priorities. New licensing branch building at traffic headquarter Rawalpindi is an appreciable initiative, one window operation will facilitate citizen in new licences and renewal and this will also improve the performance of traffic police he further added.

Upon arrival at RPO office Rawalpindi IG Punjab was presented salutations (Salami) by an active police squad followed by a crime meeting in which RPO Ehsan Tufail, CPO Capt (r) Muhammad Faisal Rana, CTO Rawalpindi and other officers participated. During meeting RPO Rawalpindi briefed IG Punjab about the Crime situation in the Region and security plan for sensitive installation and Eid-Ul-Azha. IG Punjab directed officers to speed up the operation against criminal elements and to ensure initiatives to arrest culprits involved in violence and abuse with women and children. 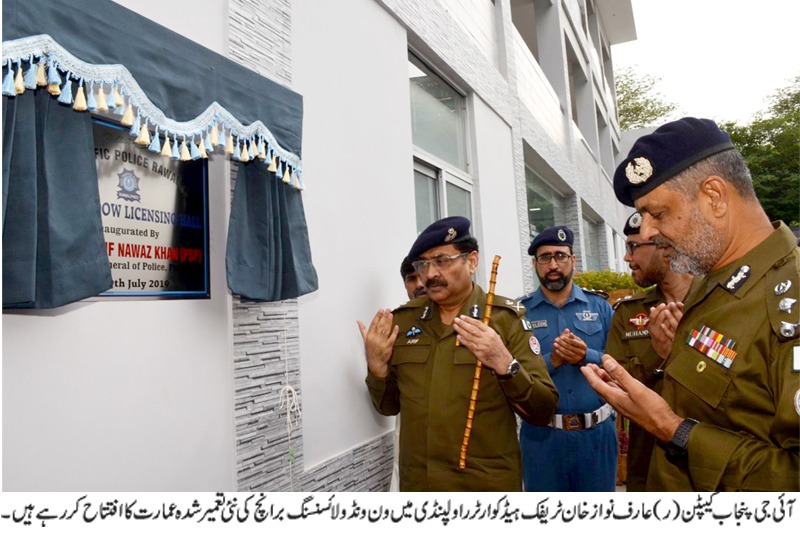