Provincial minister acknowledged the steps taken by Punjab Police for  reducing incidents of terrorism in the province.

Inspector General of Police Punjab Capt. (R) Arif Nawaz Khan said that as per vision of Prime Minister of Pakistan, Punjab Police is committed and engaged by day and night to uphold the supremacy of law besides providing police related services to public without any trouble. IGP said that effective use of modern technology with utilization of all available resources are being done so that public issues may be addressed immediately. He further said that Punjab Police has established Khidmat Marakiz with the help of its resources in all districts of the province which have been interlinked through an integrated system and more than fourteen facilities are being provided to the public under one roof. In this regard, millions of people will be able to save their money and precious time as well. These views were expressed by IG Punjab during a discussion with provincial minister for housing at Central Police Office today. During the meeting, views on  collective law and order situations and issues of mutual interests were also exchanged in detail whereas IG Punjab apprised the provincial minister about new reforms and projects in police working system.

Mian Mehmood ul Rasheed while acknowledging the steps of Punjab Police for reducing the incidents of terrorism considerably in the province said that the projects of Punjab Police to resolve the issues of public are praiseworthy and it is  top  priority of our government to upgrade the Punjab Police in accordance with modern parameters for which every possible steps will be taken. 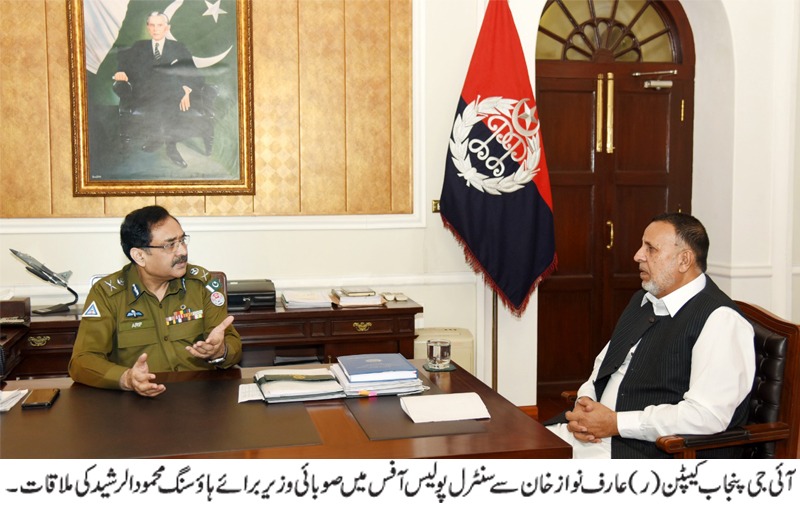