IG Punjab applauded the performance of Lahore Police in safe recovery of a girl child kidnapped for ransom.

Professional use of modern technology to solve the difficult and sensitive case is admirable. IG Punjab

Inspector General Police, Punjab Captain (R) Arif Nawaz Khan has said that CCPO Lahore, DIG Investigation, SP CIA and all of Lahore Police deserves congratulations and accolade for safely recovering the girl child Meerab kidnapped for ransom from Ameen Park Lahore. They effectively used the latest technology with professional excellence to recover the child from Hafizabad, and handed her over safely to her family. He further said that Meerab kidnapping case was a challenging case for Police and SP CIA Usman Ijaz Bajwa and his team successfully worked it out in professional way and child was returned harmless to her family. IG Punjab directed to carry on working to protect the lives and properties of public with the same professionalism to further improve the confidence building among public and police. He further said that now a days criminal elements are using latest technology to fulfil their heinous plans and this has increased the challenges of police force so all officials and officers of police should further improve their performance according to the principals of smart policing to ensure the public service and safety. He expressed these views during a cash and commendation certificates distribution ceremony among the police team members who recovered Meerab safely, today at Central Police Office.

In the ceremony IG Punjab distributed commendation certificates and a cash amount of 280,000 among the 13 officers and officials their names are DSP Muhamad Usman Haider, Inspector Muhamad Ashfaq But, Inspector Sajwar Tariq, Sub- Inspector Waseem Akram , Sub- Inspector Abdul Wahab, TSI Shahpar Shehbaz, TSI Abdulmanan Iftikhar, SI Amir Shehzad, ASI Naeem Shehzad, SI Hussain Farooq ASI Maqbool Ahmad, Muhamd Shehbaz Ali and Munawar Ali. IG Punjab while praising the performance of SP CIA Usman Ijaz Bajwa and his team said that CIA team professionally investigated the case and cracked it successfully within a short time. He further directed all officers that all Police formations should stay in close coordination and no stone should be left unturned to uproot the criminal elements of the society to ensure safety of public lives and properties. He further said that hardworking, dutiful and competent officers are pride of the department and they will be continuously encouraged at every level. At this occasion Addl IG Operations Inam Ghani, CCPO Lahore BA Nasir, DIG Investigation Inam Waheed, SSP Investigation, SP CIA and other officers were also present. 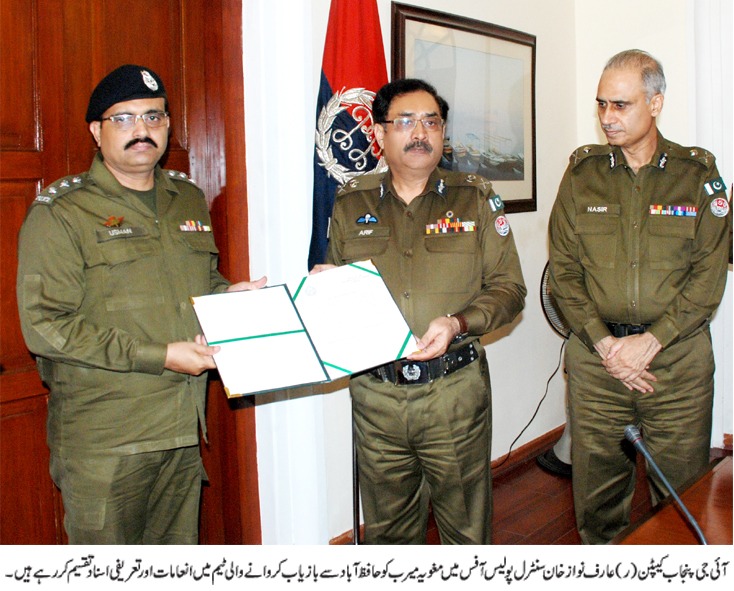