LAHORE: Samia Hanif lost her husband, Inspector Shahid Nadeem, in 2009. Immediately after his death, she found herself running between different offices to collect financial benefits, as promised by the department for the families of police officials killed during service.

“Collecting our due rights was a hectic and humiliating process,” she says while speaking to The Express Tribune. Recalling her experiences, she reveals that she was forced to wait for hours on end and travel back and forth between different offices to resolve minor issues. Sometimes, she would have to return home hopeless after spending several agonisingly long days waiting.

Just when Hanif thought there was no end to her suffering, the department introduced Welfare Eye, a computerised system designed to make the process of providing welfare to the families of martyred officials seamless, in 2017.
Now, she is able to send a simple text message about the issues she faces. In turn, staff at the office contact her and ask her to visit only when her request has been processed.

“My son was selected to tour NASA. The school administration had asked for Rs0.3 million for this purpose, which I was unable to afford,” she explains. However, with the new system in place, I sent a text message to Welfare Eye. The issue was taken up by higher ups and my son was able to tour NASA, she adds.

Rakshanda Imtiaz, wife of trainee assistant sub inspector Imtiaz Ali who died in the line of duty in July 2018, says that the very next day the department gave the family Rs50,000 for funeral expenses as per their policy. On the fourth day after my husband’s death, I received a text message from Welfare Eye informing me that I had been registered in their system, she says. They guided me throughout the whole process, she explains. In just a month, she was able to receive financial assistance, in the form of a stipend equivalent to her husband’s salary for 16 months, as per the department’s policy.

Sub inspector Umm-e-Kulsoom has been in charge of Welfare Eye since its launch in 2017. She highlights that the project was the brainchild of former SSP Administration Rana Ayyaz Saleem. Saleem came up with the idea when the widow of a slain police official visited his office. She told him that she was a resident of Kasur and made ends meet by working as a tailor.  However, she had to put her work on halt in order to travel to Lahore and collect benefits. The widow had added that if her request was not processed, she would have to make the trek a second time, Umm-e-Kulsoom recounts.

Shortly after, Welfare Eye was introduced and the families of officials killed during service since 2009 were added to the software, she adds.

The families of 311 martyrs, 1,085 police officials who died during service and 47 injured officials are registered under the computerised system, she maintains. “Whenever a death is reported in the police department, staff members are directed to enter their details into the system so that a profile can be created. We try to provide funeral expenses to the deceased’s family as early as possible,” she says.

A few days after the funeral, the family is briefed about Welfare Eye and are told to send a text message if they require financial assistance. The staff then contacts the family and provides them with the help they require. Since its launch, Welfare Eye has ensured financial assistance to 328 families, has provided jobs to 131, medical facilities to 110, provided educational scholarships to 910 and much more, she states.

Welfare Eye has also facilitated the victim’s families by resolving disputes. Umm-e-Kulsoom explains that sometimes widows are mistreated by their in-laws, sometimes even tortured, in a bid to claim benefits. We have assisted many women in such cases, she adds. 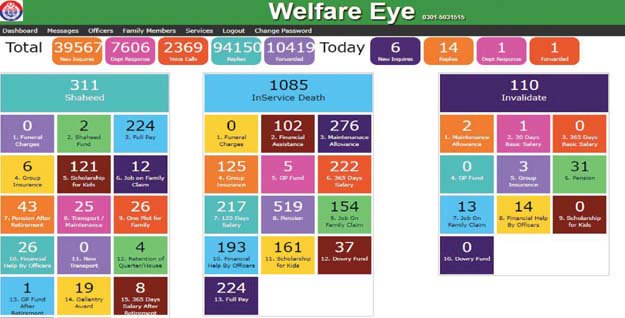