Dolphin force is allowed only to return fire In case of firing and attack on them from criminals. IG Punjab

Dolphin Force is objected to control street crimes and to promote community based policing. IG Punjab

Inspector General of Police Punjab Captain (R) Arif Nawaz Khan said that effective patrolling and timely actions of Dolphin Force helped significantly to arrest street crime rate in Lahore and other metropolitans of Punjab, however officials abusing the power or not following SOP,s has no place in the department. He further directed to take stern departmental and legal action against the officials responsible for the death of a woman in Dolphin firing, without any delay. All Dolphin officials should be thoroughly briefed that they can only fire when they are attacked or fired upon otherwise they don’t have any authority to fire, officials violating these orders should be ready for departmental and legal action. He further said that purpose of the Dolphin Force is to control street crime and also promote community policing so he also directed to ensure the effective patrolling for the security of markets along with the roads during Ramzan.  He expressed these views while giving directions to the senior police officers in a meeting held at Central Police Office today. At this occasion Addl IGP Operation Inam Ghani, Addl IGP Logistics Ghulam Rasool Zahid, CCPO Lahore BA Nasir, DIG Logistics Rai Babar Saeed, DIG Operations Lahore Ashfaque Khan and SP Dolphin Bilal Zafar were also present.

SP Dolphin Bilal Zafar briefed IGP about the performance of Dolphin Force, he shared that due to the community based policing graph of street crimes plummeted. He further said that for the capacity building of officials of Dolphin Force every year a 4 weeks refresher course is held in which they train for one week each at Police Training College Chung & Elite Training College Bedian and for two weeks at the District Police Lines, Lahore about crime control and latest professional skills and about ethics. SP Dolphin shared in briefing that currently 2416 Dolphin officials patrol in 277 beats of the city. IG Punjab further said that Dolphin Force should establish itself as a symbol of protection for law abiding citizen and threat for criminal elements. He further said that in refresher courses Dolphin officials should be specially trained to hit the target in stress position so that no passerby gets any harm. He further said that Dolphin Force is a modern force with latest skills and training objected to protect the life property and honour of citizens at any cost. Dolphin Force officials should perform with honesty hard work and commitment using their professional skills and training, good performers will be rewarded and official’s causing harm or misbehaving with citizens will dealt without any leniency. 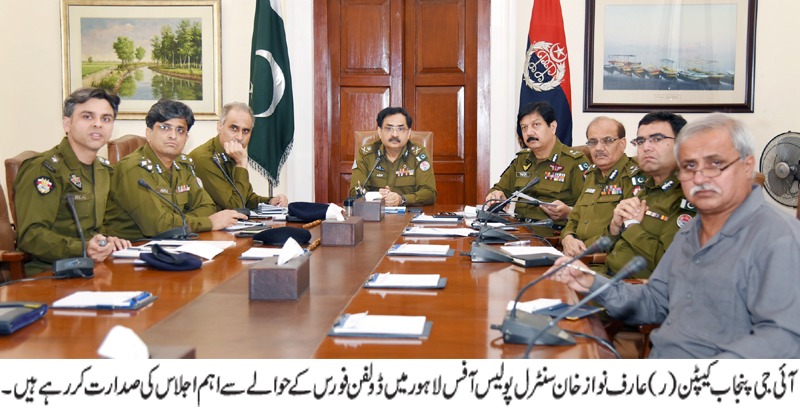