MOU was inked between Punjab Police, CERP and Harvard Canady School for research on IT projects of Punjab Police.

Inspector General Police Punjab Cap (R) Arif Nawaz Khan said that selection of IT projects of Punjab Police for research is an honour for Punjab Police; this research will also be helpful to meet the future challenges. He further said that Punjab police has started projects with the effective use of IT technology to provide best service delivery to the public and so far millions of citizens benefited from these services. He expressed these views while meeting a three member delegation from Centre for Economic Research in Pakistan (CERP). Delegation from CERP and Harvard Kennedy School was led by Associate Professor of LUMS university Professor Dr. Ali Cheema while Asim Khawaja from  Harvard Kennedy School and CEO CERP Maroof A Syed was also with him. At this occasion an MOU was inked between Punjab Police, CERP and Harvard Canady School for research on 8787 Complaint cell and Khidmat Marakaz and in the light of this research recommendations will be made to further improve the service delivery and performance of IT Projects of Punjab Police. At this occasion Addl IG Training Tariq Masood Yasin, Addl IG Operations Inam Ghani, Addl IG IAB Zulfiqar Hameed, DIG Crime Jawad Dogar, DIG Logistics Rai Babar Saeed, DIG IAB Ahsan Younas, DIG R& D Faisal Ali Rana along with other senior officials were also present.

After MOU signing Dr Ali Cheema said that MOU between Punjab Police and CERP is proof of the IGP, s trust in his IT projects and we are sure that research under this MOU will be a role model for other departments too. At this occasion IGP further said that research on the Punjab Police projects will not only help improve the functioning of these projects but will also be helpful in initiating such projects for police and public services. While thanking the members of delegate he said that Punjab police will continue to improve its IT projects for public facility and will appreciate research work in this regard. 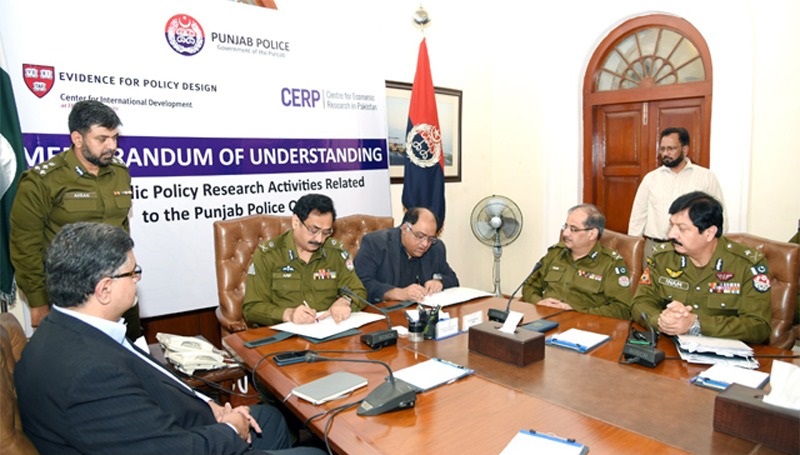