LAHORE: In a first of its kind exercise conducted to judge the performance of senior supervisory police officers, Anoosh Masood Chaudhry, a policewoman heading the Model Town investigation wing, has secured 1st position among the SPs of all six divisions of the provincial capital by scoring 346 marks.

The positions were announced on the basis of the marks awarded by the Lahore’s Investigation Headquarters after analysing the crime data of the six police divisions of the city.

The criteria in this respect was set by a think tank comprising senior officers of the Investigation Headquarters with two prime objectives -- to judge the supervisory skills of the SPs who headed investigation wings and to create a healthy competition among them.

The investigation wing of Lahore police had been neglected since long as compared to the operations wing when it comes to resource allocation, including budget and required staff, an official privy to the information told Dawn on Thursday.

He said that using available resources, the think tank came up with a new strategy to bring improvement in the investigation wing of Lahore police.

As per the new strategy, he said, the Investigation Headquarters had set targets for the city’s divisional SPs (investigation).

Recently, the think tank gathered data of the crimes reported between Jan 1, 2019 and March 31 to evaluate performance of the SPs.

“After careful perusal of crime data of the six divisions for two months regarding arrest of proclaimed offenders and challaning of all reported cases of robbery, dacoity, property disputes, Dr Anoosh was awarded 346 marks under the criteria, set by the Investigation Headquarters, clinching first position out of the six divisions”, reads an official letter issued by the Lahore’s Investigations SSP.

While commending her outstanding work, the letter further reads that she has achieved the target set by the Investigation Headquarters Lahore for service delivery and dispensation of justice.

Elaborating, the official said, out of the total 346 marks obtained by Dr Anoosh, 318 were awarded for arresting 117 (POs) of ‘A’ category and 240 of ‘B’ category. Similarly, she was awarded 17 and 10 marks, respectively, for submitting maximum number of challans of cases including of robbery, dacoity and property disputes, reported in the division. 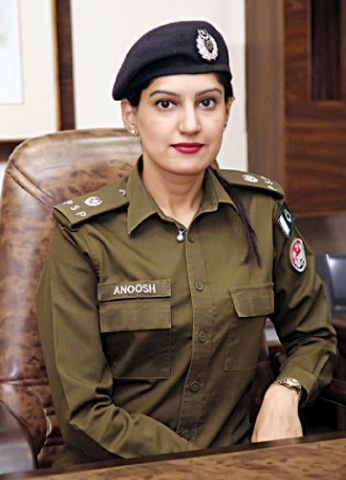