Inspector General Police Punjab Amjad Javed Saleemi said that service delivery system will be improved in order to cater issues and complaints of public and police service centers of all districts across province will be interlinked with the help of modern softwares so that resident of a district may easily get character certificate, registration of tenancy, copy of FIR and more than thirteen other facilities even residing in another district.
He further, said that comprehensive refresher courses and training workshops will be arranged to enhance efficiency of police force in all districts and ten percent of the force shall remain engaged in some activity of training so that officers and officials with the help of modern policing may serve the public in better way. He moreover, said that any delay in registration of FIRs in police stations shall not be tolerated and discipline and inspection branch of central police office will be transformed into internal accountability unit to improve effective supervision of matters of discipline.
He further said that resource management centers will be established in all districts and land mafia and anti social elements will not be spared at any cost. He moreover said that the aggrieved persons should deal with courteously at police stations and their issues should be resolved while criminals and enemies of public wealth and lives should be dealt iron handedly.
He expressed these views while taking charge of Inspector General of Police and talking to media representatives at central police office. DIG establishment Babar Bakht Qureshi,PSO to IG Afzal Ahmad Kausar with other officers were present at this occasion.
On the arrival of IG Punjab Amjad Javed Saleemi was given salutations by an alert squad of police after which ceremony of change of command took place in committee room. Former IG Punjab Muhammad Tahir formally handed over the command of Punjab Police to IG Punjab Amjad Javed Saleemi. All Addl IGs, DIGs and other senior officers were present during this ceremony. After change of command ceremony, IG Punjab met with media representatives.
IG Punjab while answering queries of media personnel told that it is an honor to hold command of biggest force of the country and I will try to fulfill this responsibility with honesty and diligence. He moreover said that after passing three decades in police service he is well aware of public issues and challenges and all available resources in the light of my experience will be utilized for achieving better public service and strategies for resolution of problems. 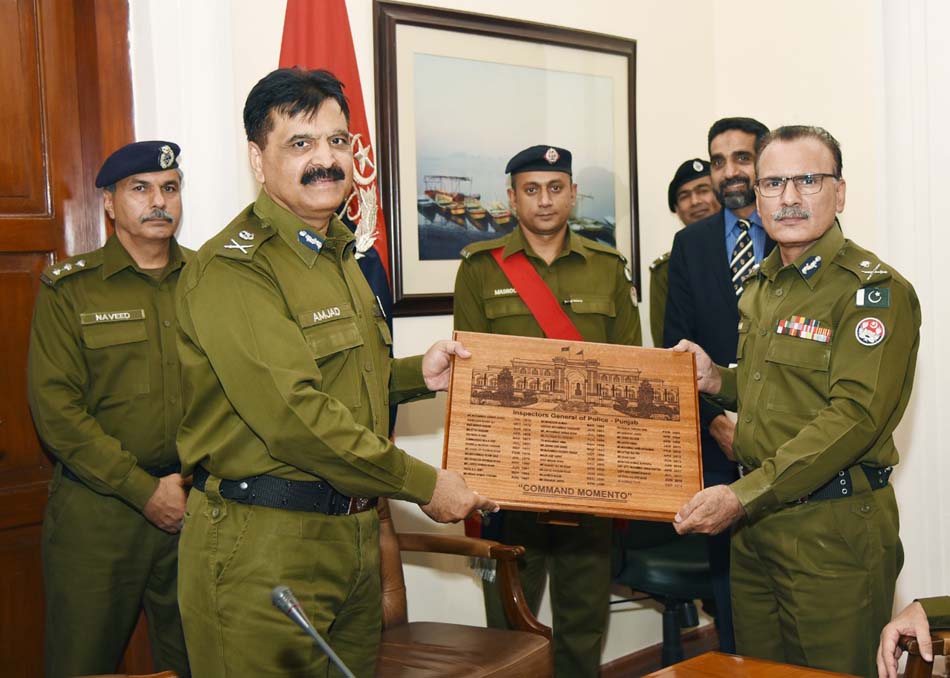