Use Of Efficient Reforms In Punjab Police Uplifted The Standards Of Force: IGP

Lahore : Inspector General of Police Punjab, Muhammad Tahir said that use of modern information technology and efficient reforms in Punjab Police uplifted the standards of force to meet contemporary challenges while crackdown campaign against professional killers and terrorist with zero tolerance is also being carried out. He further said that specialized forces like CTD, SPU, Dolphin, PRU, SOU and Anti Riots Force have improved the law and order situation and supremacy of law in society. He said that with the establishment of front desk in police station the Thana Culture has been changed and it has ensured quick reddressal of complaints and timely registration of cases. He moreover said that training courses for force have been upgraded keeping in view the rules of smart and community policing while police service center have been established in all districts of the province for the facilitation of the public where the facilities of police character certificates, tenants registration along with more than one dozen other services are being provided under the same roof. He expressed these views while addressing the question of 59 member’s delegation of 109th National Management Course .Addl IG establishment Azhar Hameed Khokhar, Addl  IG CTD Rai Muhammad Tahir, DIG Special Branch Zaeem Iqbal sheikh, DIG Training Mirza Faran Baig , DIG Headquarters Shehzada Sultan, DIG Welfare and Finance Tariq Abbas Qureshi, DIG Investigation Waqas Nazeer, DIG Establishment Babar Bakht Qureshi along with other officers attended the event. DIG Operations Punjab, Sajjad Hassan Khan Manj briefed the delegation about functioning and IT reforms of Punjab Police & steps taken against extremism and terrorism. He briefed the participants about the progress of inter provincial check posts, Special Protection Units, PHP, Riverine Force and Anti Riots Force and operations against terrorist elements with respect to National Action Plan. He told that there has been a great decline in terrorism, ransom, murder and other heinous crimes due to the comprehensive strategies and timely actions of Punjab Police. He moreover said that the projects started with the help of information technology i.e Safe City Projects, Front Desk, Police Service Centers, Criminal Record Management System, 8787 Complaints Management System and Welfare Eye along with other pioneer projects helped improving service delivery and these initiatives are also being replicated by other provinces. While replying the questions of participants about traffic management, child abuse, investigation method and actions against proscribed organizations the IG Punjab told that National Action plan is being implemented in all districts of the Punjab in its true letter and spirit. Loud Speakers Act and ban on illegal fund raising is being strictly observed and comprehensive steps are being taken against professional criminals in coordination with other law enforcement agencies by intelligence sharing. At the end the delegation was briefed about different projects of Monitoring and Control Room and 8787 IGP Complaint Service in details, concluding the visit IGP presented a souvenir to the head of the delegation. 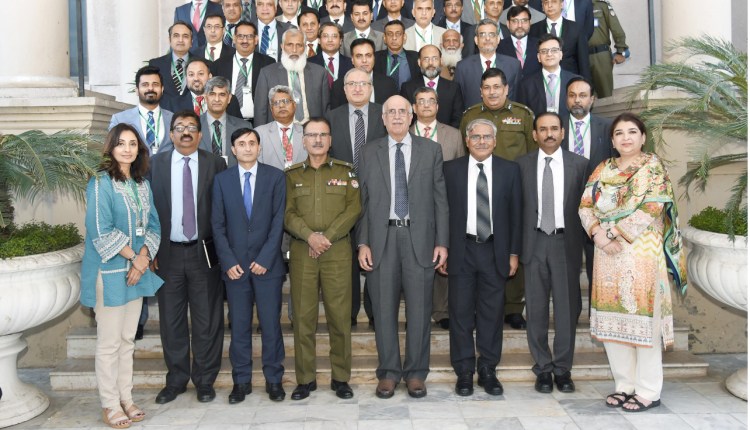