LAHORE: A gala for the families of police officers and officials was organised at the Racecourse Park on Saturday.

DIG Operations Dr Haider Ashraf said that for the first time in Punjab police’s history, an event had been organised which provided recreational entertainment for the lower cadre police officers and officials.

Speaking to The Express Tribune, he expressed that the families of officers often had the opportunity to attend and enjoy such gatherings. The purpose of this gala was to make an effort to include the lower cadre police officials in these celebrations.
Apart from providing them entertainment, it will also boost their morale, he stated. He also expressed the wish that such events be conducted on a regular basis.

He took the initiative to plan the festival in accordance with his project to improve police welfare. Policing culture cannot be changed until you ensure the welfare of the entire force, he maintained.

Punjab Police Inspector General Arif Nawaz Khan also attended the festivities. He hailed the event as a great initiative for those officials who were serving the nation.
Punjab police to digitise department’s weapon record

The festivities began at 10am and continued till 6pm. The event featured food stalls, swings, a magic show, horse riding, Dolphin bike riding, face painting and a pet show. City Traffic Police also organised a quiz competition for children and distributed prizes. The event was attended by a large number of families who could enter the premises by showing their service card.

The festivities were greatly enjoyed by the children. Nine-year-old Shiraz Ali, who attended the gala with his aunt who is a police constable, said that such events should be held more frequently. “I played on the swings, did horse-riding and now I am queuing up for the Dolphin bike ride and all of it was for free,” he exclaimed.

Eight-year-old Akbar Khan enjoyed the Dolphin bike ride the most. I would watch them on the streets and wish that someday I could ride one. Finally, my wish has come true, he said.

Jameela Bibi, the wife of a police constable, said that her husband had a very hectic work schedule with no fixed hours. Going out for them was difficult due to finances and time constraints which made the gala all the more special. 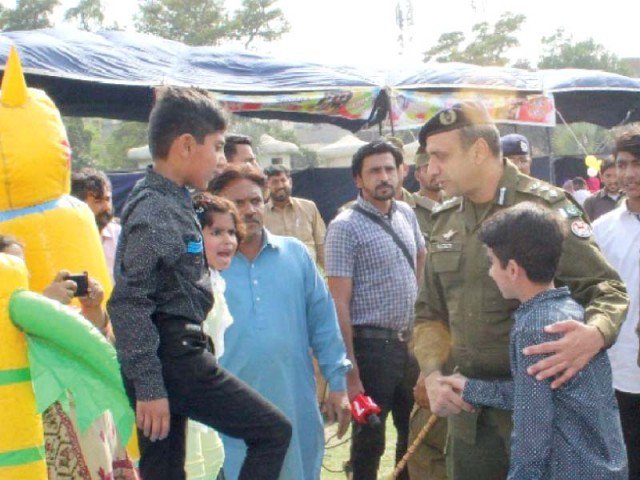