In Punjab, authorities had spread a massive security blanket across the province by employing tens of thousands of police to guard mourning processions and sittings ahead of Ashura. Pillion riding was banned for two days while mobile phone services remained partially suspended in all major cities and towns.

Also, paramilitary troops were deployed in most sensitive districts of the province. Police commandos were seen on patrol with gun-fitted vehicles along the route of the main processions. Hundreds of Elite Police Force, Police Response Units and Anti-Riot Force personnel were engaged as police mounted one of the biggest security operations in Punjab.

In Lahore, over 10,000 police were employed to maintain peace and law and order. Heavy police contingents were seen on-guard on the route of the central procession with sharp-shooters on rooftops of high-rise structures.

The central Zuljinah procession, which was taken out from Nisar Haveli inside Mochi Gate, ended at Karbala Gamay Shah after passing through traditional routes on Sunday evening. Several military units remained on standby as the police successfully carried out one of the biggest security operations.

Several Zuljinah processions were taken out from the main Imambargahs located in Thokar Niaz Baig, Model Town, Mughalpura, Shahdara, Iqbal Town and Township. Authorities used hundreds of CCTV cameras and drones to monitor processions in addition to aerial surveillance with the help of helicopters.

Mobile phones and internet services were partially suspended in nine districts of the province, including Lahore, Gujranwala, Jhang, Faisalabad, Sargodha and Jhelum. Pillion riding was also banned in Lahore for Ashura and police arrested dozens of violators in the clampdown.

Mourners in large numbers were seen beating themselves during the main Zuljinah procession on Ashura, 10th of Muharram, in remembrance of the martyrdom of Imam Hussain (AS), the grandson of Holy Prophet Muhammad (peace be upon him).

Many of them were beating themselves with chains and knives. A spokesman for the Edhi Foundation told reporters that they provided first-aid to at least 5,700 Azadars on-the-spot, while 23 people were shifted to hospitals with multiple injuries.

The Edhi foundation had deployed over 50 ambulances and 150 volunteers to provide medical treatment to mourners. A number of special Sabeels of milk and water were arranged for the mourners on the route of the processions. The participants were also served free food items and juices.

On the pattern of the safe city project, hundreds of CCTV cameras were installed on the route to monitor the processions in Lahore. The police recorded videos of all main processions as part of the security strategy.

At least 5500 Majalis and 650 processions were held in Lahore during the first 10 days of the holy month, police officials said.

DIG (Operations) Dr Haider Ashraf told The Nation that combing operations launched in Punjab days before the start of Muharram had created deterrence. He said the police had implemented a comprehensive security strategy. “We had implemented a set of safety measures that included security sweeps, deployment, human resource, IT, coordination, and cooperation.”

Haider said “security and law and order” were two basic challenges for the police during Ashura. “It was a team effort. The Punjab Rangers, and security and intelligence also played an important role to maintain peace in the metropolis.” The integrated command and control system, a part of the safe city project, proved very effective in security monitoring, he added.

Earlier, police high-ups held several meetings with the religious leaders and scholars of different schools of thought to take all communities into confidence. The deployment of police force, details of the scheduled mourning processions and Majalis and security strategies were shared with the administrations of Imambargahs and organisers of sittings during the deliberations.

Meanwhile, Punjab IGP Arif Nawaz Khan on Monday appreciated his force for dedicated duties during Muharram, especially on 9th and 10th. He said that despite threats of terror attacks, the Punjab Police provided foolproof security to all processions and Majalis and proved to be one of the best police forces in world that had the ability to deal with any challenge in any situation. 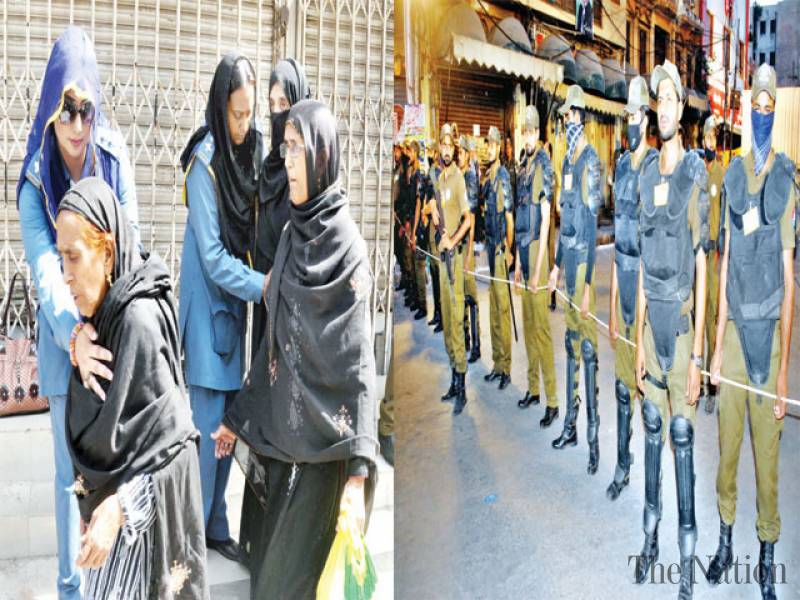